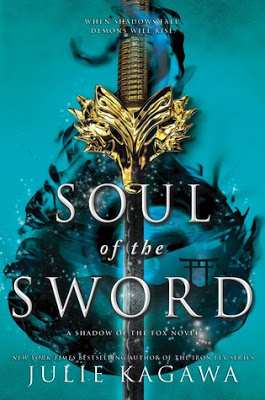 Synopsis: One thousand years ago, a wish was made to the Harbinger of Change and a sword of rage and lightning was forged. Kamigoroshi. The Godslayer. It had one task: to seal away the powerful demon Hakaimono.

Now he has broken free.

Kitsune shapeshifter Yumeko has one task: to take her piece of the ancient and powerful scroll to the Steel Feather temple in order to prevent the summoning of the Harbinger of Change, the great Kami Dragon who will grant one wish to whomever holds the Scroll of a Thousand Prayers. But she has a new enemy now. The demon Hakaimono, who for centuries was trapped in a cursed sword, has escaped and possessed the boy she thought would protect her, Kage Tatsumi of the Shadow Clan.

Hakaimono has done the unthinkable and joined forces with the Master of Demons in order to break the curse of the sword and set himself free. To overthrow the empire and cover the land in darkness, they need one thing: the Scroll of a Thousand Prayers. As the paths of Yumeko and the possessed Tatsumi cross once again, the entire empire will be thrown into chaos.

Soul of the Sword was even better than the first book in my opinion. Like the first one, it had a long journey and it was a fiery beast. I was so happy to see all of the characters we love back and growing stronger than before.

I loved the character development we get to see in this second installment. I thought Yumeko still sounded very naive throughout most of the book. At the end she seems to grow immensely and I was happy to see it. Also, I was very happy with Tatsumi’s end-game in this. It was unexpected, but I’m super curious to see how it plays out in book three.

We also get to see more of the world and empire which is always super fascinating. I loved getting to see more of the shadow clan and how mysterious and sneaky they actually are. I would even mind a spin-off of a character growing up in that clan. It would be dark and absolutely entrancing.

Overall, I am SO happy with where this story is going. Julie Kagawa continues to slay the fantasy world, and I cannot wait to read the next installment!