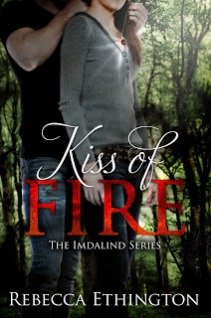 Synopsis: Joclyn Despain has been marred by a brand on her skin. She doesn’t know why the mark appeared on her neck, but she doesn’t want anyone to see it, including her best friend Ryland, who knows everything else about her. The scar is the reason she hides herself behind baggy clothes, and won’t let the idea of kissing Ryland enter her mind, no matter how much she wants to. The scar is the reason she is being hunted.

If only she knew that she was.

If only she had known that the cursed stone her estranged father sent for her 16th birthday would trigger a change in her. Now, she is being stalked by a tall blonde man, and is miraculously throwing her high school bully ten feet in the air.

Joclyn attempts to find some answers and the courage to follow her heart. When Ryland finds her scar; only he knows what it means, and who will kill her because of it.

Thoughts: I just loved this book! In Kiss Of Fire, I immediately fell in love with Ryland and Joclyn, got completely sucked in the story and loved it till the end. The concept of this story is amazing. The twists thrilling. And, the romance so perfect and bittersweet.

Joclyn is different from most main characters and I loved her for it. I love how she liked to ride a long board around. I like how she prefers to be invisible, how even though she’s trying to hide her scar it’s more than that. She likes to be herself and doesn’t want to stand out in a crowd. She’s strong and brave, and I adored her character. Her only tick, of the people she cares most for, is Ryland. Ryland LaRue who is so opposite of her. Ryland is filthy rich. One hundred and a million percent hot with stunning blue eyes. Goes to an all boys school. And yet, he is best friends with Joclyn. As you watch their relationship you can see how close they are. How much Ryland protects Joclyn and would do anything for her. I fell head over heels with Ryland… I just love that boy so dang much. I want a future for these two! Totally Joclyn + Ryland ship here!

Other than Ryland and Joclyn there are other characters to love like Wyn and Ilyan. Wyn is such a great and outgoing friend. Then there’s Ilyan, who I actually really, really liked. And no one hit me for saying this because I AM Team Ryland till the end, but I wouldn’t mind if something were to happen between Ilyan and Joclyn because I think he’s a good guy.

The ending is a killer. How can you make us fall so deeply for a character then take it away? Believe me when I say I was definitely hoping for a different ending but alas, it just gives me something to hope for in the next four books! I’m hoping its resolved before the final book, but I’ll just have to read on and find out! Loved the world, the concept, all of the characters (good and bad), and just everything about this story! On to the next one!

2 thoughts on “Kiss Of Fire by: Rebecca Ethington”