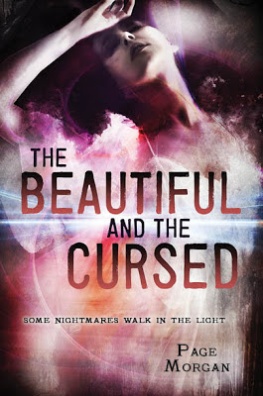 The (US) Blurb:
Fans of Cassandra Clare’s Mortal Instruments series and Libba Bray’s Gemma Doyle trilogy will devour The Beautiful and the Cursed, a wholly original interpretation of gargoyle lore.

It was bizarre and inexplicable, but after it happened no one spoke of it and Ingrid Waverly was forced to leave her life in London behind. She had to trade a world full of fancy dresses and society events for Paris with her mother and younger sister, Gabby.
In Paris there are no grand balls or glittering parties, and, disturbingly, the house her twin brother Grayson found for them isn’t a house at all. It’s an abbey. A creepy, old abbey with a roof lined in stone gargoyles that one could almost mistake for living, breathing creatures.
And Grayson is missing.

Yet no one seems to be concerned about Grayson’s whereabouts save for Luc, a devastatingly handsome servant who has some secrets of his own. There’s one secret about the city that he can’t keep hidden, though. There’s a murderer on the loose. And every day Grayson is missing means that there’s less of a chance he’s alive.
Ingrid is sure her twin isn’t dead–she can feel it deep in her soul–but she knows he’s in grave danger, and that it’s up to her and Gabby to find him before all hope is lost.

Only the path to him is twisted—and more deadly than she could ever imagine.

Ingrid Waverley is a young woman to be reckoned with. Faced with her brother’s mysterious disappearance after an abrupt move to Paris, she is determined to discover what has happened to him. Soon she and her sister Gabriella are drawn into a Parisian underworld more terrifying than they could ever have imagined, but watching over them are two impossible (and impossibly handsome) young men. Luc is a ‘Dispossessed’, an ancient gargoyle whose sworn duty it is to protect the humans who inhabit his abbey. Nolan has secrets of his own too. He is a member of the Alliance – a shadowy group dedicated to keeping Paris safe from the demonic forces that threaten to destroy it.

Secrets, danger and hidden powers stalk the girls in this beautifully imagined paranormal romance that will keep readers gripped from beginning to end – and one thing is for sure – you’ll never look at a gargoyle in the same way again…

I think the US cover is beautiful, love the colors. While the UK cover is dark and eerie which makes me wonder about the book! Which of the covers do you prefer? Sound off in the comments!
___________________________________
About Page Morgan:
Page Morgan has been intrigued by les grotesques ever since she came across an old, black-and-white photograph of a Notre Dame gargoyle keeping watch over the city of Paris. The gargoyle mythologies she went on to research fed her imagination, and she became inspired to piece together her own story and mythology for these complex stone figures. Page lives in New England with her husband and their three children.

One thought on “Cover Reavel: The Beautiful and The Cursed”