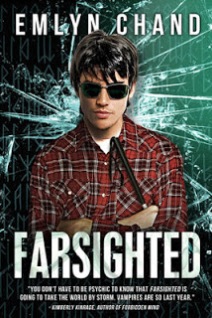 Synopsis: Alex Kosmitoras’s life has never been easy. The only other student who will talk to him is the school bully, his parents are dead broke and insanely overprotective, and… oh yeah, he’s blind.

Just when he thinks he’ll never have a shot at a normal life, an enticing new girl comes to their small Midwest town all the way from India. Simmi is smart, nice, and actually wants to be friends with Alex. Plus she smells like an Almond Joy bar. Sophomore year might not be so bad after all.

Alex is in store for another new arrival—an unexpected and often embarrassing ability to “see” the future. Try as he may, Alex is unable to ignore his visions, especially when they suggest Simmi is in mortal danger.

With the help of the mysterious psychic next door and friends who come bearing gifts of their own, Alex embarks on his journey to change the future. 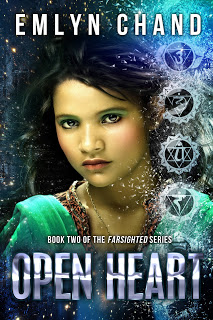 Synopsis: Simmi Shergill’s life is a mess. Her powers of psychic feeling are on the fritz, and Grandon Township’s sudden population boom has brought quite a few unsavory characters to town. She also looks like an over-blown balloon in her size 14 pants, but not even starving herself seems to be helping.

At least she has Alex, the boyfriend who loves her so much he’d do anything for her. Last summer, he even risked his life to protect her from the mysterious boy everyone was convinced wanted to kill her.

Just one problem: she’s not so sure she feels the same way. Is Alex really the man of her dreams? Why can’t she stop fixating on her would-be killer, Dax? Part of her wants to run screaming in the other direction whenever Dax is around, while the other part longs to run into his embrace, no matter whom she’d hurt or what she’d risk.

Simmi’s loyalty is on the line. Whom will she choose—the blind seer who loves her, or the charming telekinetic with “bad idea” written all over him? Emotions run high in the tension-packed book two of the Farsighted series.

Emlyn Chand emerged from the womb with a fountain pen clutched in her left hand (true story). When she’s not writing, she runs a large book club in Ann Arbor and is the president of author PR firm Novel Publicity Best known for her Young Adult novels, she is also developing a small, but devoted, following to her children’s book series and is beginning to dabble in other genres as well. Emlyn enjoys connecting with readers and is available via almost every social media site in existence. Visit www.emlynchand.com for more info. Don’t forget to say “hi” to her sun conure Ducky!
______________________________________
– Open Heart Review –
\
Open Heart starts us right where we left off in Farsighted except now we’re looking through Simmi’s eyes. This book definitely amps up the personal emotions and deals with topics many people struggle with. It’s a page turner with lots of deep internal struggles.

I really ached for Alex in this one. I loved him and how he overcame his blindness in book one. Through out Open Heart I just felt as if Alex kept getting one disappointment after another. Yet he has such a good heart and is loyal, I really like him as a character. Then there’s Simmi, another character who I really enjoyed in Farsighted but in Open Heart I’m going to be honest I started to not like her. I totally felt for her while she dealt with personal problems because I’ve been there and felt that way, but towards the end the way she handled certain things I was really disappointed in her. I just wish she would have made some different decisions.

However, I must say Shapri really grows on me the more we see her. In book one I liked her, but in Open Heart I love her. I feel like she’s finally becoming comfortable with her powers and she’s so easy going. Yet at the same time she’s bubbly and her heart and head are always in the right place. With that, another character I liked was Dax. I was definitely nervous of the role he’d play but he definitely grew on me. I love his dark hair, pale skin, and green eyes and I also liked how he handled things with Simmi. He admitted his mistakes and handled the relation the correct way and I commend him for that.

Overall Farsighted was definitely enjoyable. We get school drama, personal problems, romance, heartache and all while still in the world of psychics. I give Emlyn props for writing some hard emotional scenes where Simmi’s eating disorder is concerned and thought those were done really well. There were still a few things though I wish we’re handled differently, but over all I liked Farsighted and would definitely still read the next book.