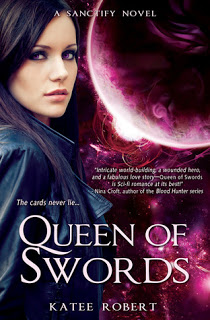 Synopsis: When the cards tell Ophelia Leoni she’s supposed to marry the Prince of Hansarda, the gunrunner grits her teeth and boards the starship that comes for her. It doesn’t matter if the ship’s commander is the gorgeous stranger whose bed she just spent a wild, drunken night in. As a Diviner, she’s painfully aware the cards don’t lie. Ever.

Boone O’Keirna knows Ophelia is trouble the second he sees the way she moves. Not about to let the deadly little hellcat marry his sadistic half-brother, Boone pretends to be the Prince’s emissary and kidnaps Ophelia. Too bad they can’t be in the same room without him wanting to throw her out an airlock–or into bed.

Even as they fight each other–and their explosive attraction–Ophelia and Boone sense something is wrong. Too much is going their way. Soon, they realize while the cards may never lie, the truth is sometimes hidden between them…and the future king of Hansarda is not one to take defeat lying down.

Buy A Copy!
Barnes and Noble || Amazon || The Book Depository

Katee Robert learned to tell stories at her grandpa’s knee. Her favorites then were the rather epic adventures of The Three Bears, but at age twelve she discovered romance novels and never looked back.

Though she dabbled in writing, life got in the way—as it often does—and she spent a few years traveling, living in both Philadelphia and Germany. In between traveling and raising her two wee ones, she had the crazy idea that she’d like to write a book and try to get published.

Her first novel was an epic fantasy that, God willing, will never see the light of day. From there, she dabbled in YA and horror, before finally finding speculative romance. Because, really, who wouldn’t want to write entire books about the smoking-hot relationships between two people?
She now spends her time—when not lost in Far Reach worlds—playing imaginary games with her wee ones, writing, ogling men, and planning for the inevitable zombie apocalypse.

– Peeta, Gale, and Finnick
Kiss Finnick, marry Gale (yum!) and… damn. I guess kill Peeta. He’s great for Katniss, but the man wouldn’t survive a zombie apocalypse.
– 3 characters from Queen Of Swords
Kiss Jenny, marry Boone (of course!), and kill Kristian (sadistic half-brother to the dreamy Boone) – and yeah, they’re all in the same family. So sue me 😛
2) What inspired you to write books with futuristic worlds and characters with awesome abilities?
I had been trying to put together a heroine for my SF world for ages and had my palm read at our county fair. Palm reading is just a half jump sideways from tarot and reading tarot fit my needs perfectly. And it’s so fun!
3) Favorite place to write?
I have a specific couch (half covered in sticky notes and spare papers) where I write.
4) Theme song for Queen Of Swords?
Oh, that’s a hard one. It’s less a theme song than the one I had on repeat (with a few others) through the whole writing of this book – New Dark Ages by Bad Religion.
5) Which scenes do you like to write best? (Kissing, Fighting, Comical) Why?
Well, that’s up for debate! LOL. I’m not sure which I write best, but the fighting scenes come most naturally to me. I see how things work in my head and do my best to translate that over into the story.
6) If you could pick an actor who resembles Boone, who would you pick? How about Ophelia?
Boone is Ian Somerhalder with about 50 extra pounds of muscle. Ophelia is Eliza Dushku.
7) For those who haven’t read your books, give us a mini description in 10 words or less!
Exiled prince kidnaps gunrunner’s daughter–chaos and smexy times ensue.
8) Anything else you’d like to tell us about you or your books? 🙂
Oh lordy, let’s see. Just that I hope you enjoy Ophelia and Boone’s story and if you ever want to talk zombie plans or sexy good times, you can find me on Twitter – @katee_robert.
______
– My Review –
I loved this book! Plain and simple. The worlds that Katee created are beyond imaginative. They’re so futuristic, exciting and so diverse. Plus with Queen Of Swords, there is constant action, arguing, sex, witty remarks, and kick-ass characters. It’s one long thrill ride, and I’d warp into this world any time!

______
– Giveaway –
– One winner will win an eBook copy of Queen Of Swords!!
– The Winner will get to choose which format they’d like!
– International
– REMEMBER! This is an ADULT book. Though it is fantastic, so that shouldn’t shy anyone away! 🙂
– Good Luck!