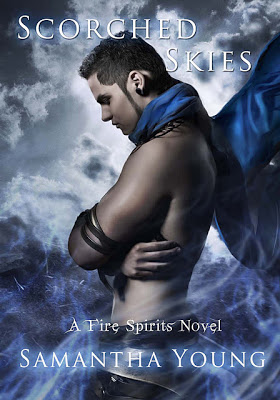 Synopsis: The White King has crossed the line, sounded the horn, sent out the wolves.

When blood is shed and life is lost the reality of Ari’s position as both hunter and prey finally sets in. It seems her father will stop at nothing to force her will to his own and distracted by Charlie’s latest mistake and her seemingly misguided attraction to Jai, Ari never thought to fear anyone else but the Jinn King.

Blindsided and attacked, Ari learns a new wolf has joined the hunt. A dark sorcerer believes he knows a way to bleed the power of the Seal and wield it as his own, and he is even less patient than The White King.

It’s time for Ari to become the hunter.

Thoughts:  Just wow. The uniqueness, realness, and thrills that Samantha  brings to this series always seem to blow me away. I adored this installment from beginning to end!

*Spoilers for Smokeless Fire below*

We start off right where we left off in Smokeless Fire. Ever since coming back from the hospital, Ari’s dad is different and still very much reserved. Charlie is now a scorcer and trying to get Ari’s attention. And Jai is still her body guard… and only that. When someone close to Ari is killed, the trio soon figures out that Ari is being hunted by a dark sorcerer. Everything Ari has ever known changes so quickly, and she is thrown into the Jinn world even more now. But, Ari isn’t weak. And it’s time she turned the tables and hunt those who are trying to destroy her.

Goodness, I heart this series so much. Taking an adventure with a concept that is new to you is always so engaging and enchanting. With Scorched Skies, you’re taken even more into the lore of Jinn that you may or may not know much about. And I love how Samantha kept switching view points. Sometimes from Ari, sometimes from Charlie, sometimes from Jai, and sometimes from other characters! And, even if it doesn’t say “Jai”, she does it in a way where you instantly know what characters eyes we’re looking from and I loved it.

As always, I fell in love with our characters all over again. I’m so proud of Ari in Scorched Skies. The way that she takes control, is so strong, yet can still break down when she needs to. I even adored the way she handled the boy situation. Speaking of… Charlie is still that misguided, broken boy that I wanted to save. In Scorched Skies, we finally see the change that we always wanted in his feelings towards Ari. And I love Charlie, I really do… even If his priorities are sometimes not in the right place. There’s just something about him, unf! On the other side is, Jai. Sexy protector that I adore! I absolutely loved that Samantha showed us his world in this book. Especially Trey! Oh my goodness I LOVED him! Send me a Trey ASAP!  But back to Jai, each book you can just feel his love for Ari and you want to hit him for holding it back. Because, as much as I love Charlie, Jai is the one for Ari. He’s the one who will love her completely and be there to protect her. You can’t help but fall for him.

Overall, I was SO completely and totally happy with book two in the Fire Spirits series. And, I thought the ending was perfect! It was so satisfying, yet still thrilling and leaving you wanting the next one! One of the things I love is that Samantha doesn’t wait until the final book to give you everything you’re hoping for. And who knows what she’ll have to offer in her upcoming books, but I know I’ll be getting them as soon as they release!

– 5 out of 5 Splatters –
PS. Check out my blog on Tuesday! I’ll be posting a part that I loved from Scorched Skies!