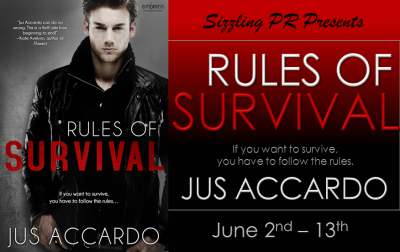 Rules of Survival
By: Jus Accardo

If you want to survive, you have to follow the rules.

Mikayla Morgan is wanted for her mother’s murder. She’s been on the run for almost a year now, avoiding not only the police but the real killer. Tired of running and desperate to clear her name, she breaks one of the most sacred rules: never return to the scene of the crime.

Every bounty hunter on the Eastern Seaboard is after the Morgan girl—but Shaun Denver and his partner snagged her. She’s a piece of work, and Shaun can’t decide if he wants to kiss her or kill her. When things take a sharp turn south, Shaun does the only thing he can think of to keep her close—he handcuffs them toge ther.

As the danger mounts and the killer closes in, the chemistry between them threatens to explode. Shaun and Kayla will need to break all the rules if they hope to get out of this alive.

JUS ACCARDO spent her childhood reading and learning to cook. Determined to follow in her grandfather’s footsteps as a chef, she applied and was accepted to the Culinary Institute of America. But at the last minute, she realized her true path lay with fiction, not food.

Jus is the bestselling author of the popular Denazen series from Entangled publishing, as well as the Darker Agency series, and the New Adult series, The Eternal Balance. A native New Yorker, she lives in the middle of nowhere with her husband, three dogs, and sometimes guard bear, Oswald.

Mikayla Morgan is such a great character to follow. This girl has been place to place, never settling down and constantly on the run. When your mom was a “criminal” you don’t really get much choice in the matter. I admire her strength so much too throughout this book. Kayla is eighteen and already had to deal with the death of her mother, being hunted down like a dog, and dealing with people trying to kidnap or kill her. She’s definitely one bad-ass chick!

Then there’s Shaun Denver….oh hello hot stuff. I adore when a guy is more than just looks and snark. Shaun has those, and the built arms and the sexy smirk, but he also has so much more behind all of that. He’s loyal and protective and fierce and can throw one heck of a punch. I also love how he keeps his promises. I adored watching Kayla and him together and was rooting for them till the very end.

Another thing I loved was how Jus set this book up. She started off with an awesome opening chapter, introduced the important people and then jumped right into the story. That’s one thing I adore about all of her books, there’s no talking your ear off with back story, no lolly-gagging, just straight into the action and no going back. What I also felt was so great about Rules of Survival is that she revealed just enough and just the right points and I adored every moment.

This book was just all sorts of fantastic. Rules of Survival is just constant speed, constant action and filled with two awesome main characters that light up the book with their chemistry. I could not put this one down and it is definitely a must buy!

FIND THE REVIEW AND RATING HERE 🙂