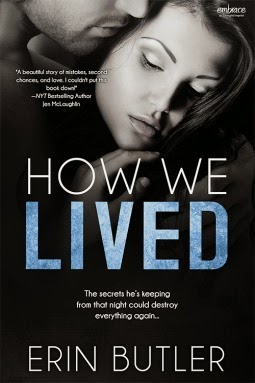 Nineteen-year-old Kelsey Larkin’s parents uninvited her to her brother’s funeral. She just wanted to wear jeans and a T-shirt—the clothes Kyle would’ve wanted her in—not wrap herself up in death. So she watched the funeral from afar, like an outsider. Which is just how she feels.

Chase came, though, just like she knew he would. Until a few months ago, the three of them had been best friends, and then Chase made a mistake that shattered both families. But when Kelsey looks at him, she doesn’t see her brother’s killer. She sees the boy next door who’s always taken care of her. She sees home.

I just adored this book. How We Lived takes a death and spins it into a story with so many emotions and so many individuals overcoming grief. It has such a dark feel yet romantic and sexy too and I loved the combo.

Kelsey is such a great character for so many reasons. First, there is a huge change from her in the beginning to her at the end of the book and I was so proud of her for realizing she needed to change how she was living. Next I love show she reacted with her parents. Sometime people need a kick in the butt whether they want it or not. Then finally her relationship with Chase. Kels starts as one girl and then grows so much in the love department when it comes to Chase and I just adored them together.

I instantly loved Chase…maybe I thought he was an idiot for drinking and driving but I never once hated him. You can tell that he is a great guy who just got put into a crappy situation. Plus, it so blatantly clear how much he loves Kels and I could help but root for him.

One other character I have to give a shout out to is Vito…best old dude cooker advice giver EVER!

This book has such a dark feel and I love books like that. I will admit in the beginning there was a lot of emotion monologues instead of showing us, but it quickly subsided and didn’t effect my read at all. With that being said How We Lived had so many elements I just adored. I like how Kyle was weaved in and out too with memories, that he played such an essential role in the story. More than that there was a little coming of age, family drama, learning who you are and what you want, sad moments, romance, sexiness… I just overall really enjoyed it. Definitely another great Embrace book!