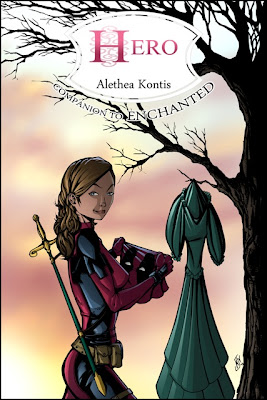 Synopsis: Rough and tumble Saturday Woodcutter thinks she’s the only one of her sisters without any magic—until the day she accidentally conjures an ocean in the backyard. With her sword in tow, Saturday sets sail on a pirate ship, only to find herself kidnapped and whisked off to the top of the world. Is Saturday powerful enough to kill the mountain witch who holds her captive and save the world from sure destruction? And, as she wonders grumpily, “Did romance have to be part of the adventure?” As in Enchanted, readers will revel in the fragments of fairy tales that embellish this action-packed story of adventure and, yes, romance.

New York Times bestselling author Alethea Kontis is a princess, a goddess, a force of nature, and a mess.
She’s known for screwing up the alphabet, scolding vampire hunters, turning garden gnomes into mad scientists, and making sense out of fairy tales.Alethea is the co-author of Sherrilyn Kenyon’s Dark-Hunter Companion, and penned the AlphaOops series of picture books. Her short fiction, essays, and poetry have appeared in a myriad of anthologies and magazines. She has done multiple collaborations with Eisner winning artist J.K. Lee, including The Wonderland Alphabet and Diary of a Mad Scientist Garden Gnome. Her debut YA fairy tale novel, Enchanted, won the Gelett Burgess Children’s Book Award in 2012 and was nominated for both the Andre Norton Award and the Audie Award in 2013.

Born in Burlington, Vermont, Alethea now lives in Northern Virginia with her Fairy Godfamily. She makes the best baklava you’ve ever tasted and sleeps with a teddy bear named Charlie.