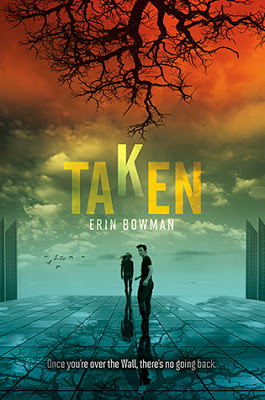 Synopsis: There are no men in Claysoot. There are boys—but every one of them vanishes at midnight on his eighteenth birthday. The ground shakes, the wind howls, a blinding light descends…and he’s gone.

They call it the Heist.

Gray Weathersby’s eighteenth birthday is mere months away, and he’s prepared to meet his fate–until he finds a strange note from his mother and starts to question everything he’s been raised to accept: the Council leaders and their obvious secrets. The Heist itself. And what lies beyond the Wall that surrounds Claysoot–a structure that no one can cross and survive.

Climbing the Wall is suicide, but what comes after the Heist could be worse. Should he sit back and wait to be taken–or risk everything on the hope of the other side?

Thoughts: Let me first start out by saying that this cover is one of my favorite YA covers, ever. I absolutely love the tree, the colors, the reflection, the boy, the fact that the girl is running away. It’s so haunting yet gorgeous. With Taken, I admit, it took me a little bit to get into this one. Something just wasn’t connecting for me in the beginning but as the story moves along it’s thrilling and filled with surprises I wasn’t expecting. And by the end, I was needing to know what would come next.

Gray was a difficult character should I say. He’s so very angry most of the time. But, underneath that he’s strong and actually has a huge heart for things that matter to him. I love how he fights for what he lovesand believes in. Plus he has gray saltwater eyes… have to love that. Then there’s his brother. For the short time we see Blaine, I absolutely love him. His mind and heart are always in the right place. The fact that he constantly plays the “big brother” and his fight for his daughter just melted my heart. I hope we see a lot more of him in the future.

Then there’s the love triangle. On one side there’s Emma. The girl Gray has loved since he was young. The girl who follows Gray into danger for him. The girl who Gray doesn’t ever forget about and risks his life for. On the other side is Bree. Bree is rough around the edges. She’s the hard one who doesn’t let a boy weaken her, who Gray easily understands and gets along with. Between the two, I have to admit I was totally team Emma for almost the whole book until the very end. I wanted to kick Emma in the shins at one point. But then when the book ends I found myself still somewhat torn. So, I’m definitely curious to see how the romance will play out in book two.

With the writing, and this could just be me, but I felt as if it was geared towards younger readers. Yes, I know it’s young adult but the main character is eighteen which is on the older side of young adult. I can’t exactly pinpoint what felt off to me, just that thoughts of Gray just seemed way younger than they should have been. Granted, he did grow up very sheltered and of course then that could have been done on purpose. Remember, this is my opinion only but I just unfortunately wanted more.

I know my review may seem somewhat negative, but I promise you it’s not. I actually enjoyed the book and the story. These four main character were very different from ones you normally read about. They all link and weave in unique ways and even if the story may seem “predictable” or “alike to other stories” to you, I honestly didn’t think it was. It was very thrilling. What surprised me was that my emotions actually moved along with Gray’s. I felt surprise and anger a lot through out the story just as he did. I love when an author can make you feel what their characters are feeling. Overall definitely an enjoyable book and I’m curious to see how the series will play out. Plus, I’m hoping for another stunner of a cover!

2 thoughts on “Taken by: Erin Bowman”