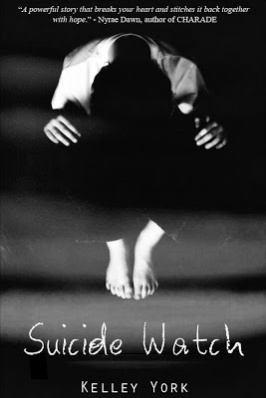 Synopsis: 18-year-old Vincent Hazelwood has spent his entire life being shuffled from one foster home to the next. His grades sucked. Making friends? Out of the question thanks to his nervous breakdowns and unpredictable moods. Still, Vince thought when Maggie Atkins took him in, he might’ve finally found a place to get his life—and his issues—in order.

But then Maggie keels over from a heart attack. Vince is homeless, alone, and the inheritance money isn’t going to last long. A year ago, Vince watched a girl leap to her death off a bridge, and now he’s starting to think she had the right idea.

Vince stumbles across a website forum geared toward people considering suicide. There, he meets others with the same debate regarding the pros and cons of death: Casper, battling cancer, would rather off herself than slowly waste away. And there’s quiet, withdrawn Adam, who suspects if he died, his mom wouldn’t even notice.

As they gravitate toward each other, Vince searches for a reason to live while coping without Maggie’s guidance, coming to terms with Casper’s imminent death, and falling in love with a boy who doesn’t plan on sticking around.

Thoughts: Some authors have a way of pulling me into their writing and making me feel all the emotions. Making me want to crawl inside myself and ask why I feel like I relate to these characters and their issues. Yet, that’s what makes you love books. Feeling like you can relate to them, love them, or want to fix them. I felt all of that with the characters in Kelley’s book. Loved every moment in Suicide Watch, from the haunting opening to the bittersweet ending.

Vince did it. He graduated high school… something he wasn’t so sure he’d ever do. He’s been socially awkward and withdrawn. After constantly hopping from foster home to foster home he thinks he finally has something going for him with Maggie. But, then Maggie dies of a heart attack and he’s not sure his life is worth living now. He’s homeless and only has money to support him for a little while. Vince seeks out somewhere to put his emotion and finds a website geared towards people considering suicide. It’s there he meets Casper and Adam. Casper who is already dying of cancer and wants to control her own death. And, Adam who’s quiet and invisible in his own home. Together the three of them use their suicidal thoughts to form a bond like no other.

There’s something about struggling characters with dark emotions that seem to always pull me in to their abyss. I’m not quite sure what it is, but it’s these kind of books that never fail to me. I live for these heart-wrenching stories. Yet it’s not all thunderstorms in Suicide Watch. I found myself absolutely loving Vince, Casper, and Adam’s stories. How they literally become each other’s last hope, each other’s reasons for sticking around. And, Adam and Vince they’re exactly what each other needs. Someone to tell you ‘Hey you’re worth living for’. We all need those people every now and again.

Overall, I absolutely adored this story from beginning to end. The beginning, as haunting as it was… I absolutely loved it and I loved how Kelley brought it full circle in the end. Each character also has their own story, yet they all connect in one way or another and I think Kelley did a beautiful job of intertwining them all.  I have absolutely adored every story Kelley has written so far and Suicide Watch is no exception. It’s bittersweet, emotional, and overall a haunting beauty.

One thought on “Suicide Watch by: Kelley York”