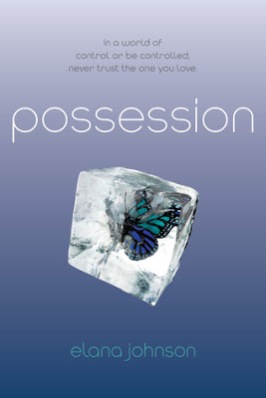 Synopsis: Vi knows the Rule: Girls don’t walk with boys, and they never even think about kissing them. But no one makes Vi want to break the Rules more than Zenn…and since the Thinkers have chosen him as Vi’s future match, how much trouble can one kiss cause? The Thinkers may have brainwashed the rest of the population, but Vi is determined to think for herself.

But the Thinkers are unusually persuasive, and they’re set on convincing Vi to become one of them…starting by brainwashing Zenn. Vi can’t leave Zenn in the Thinkers’ hands, but she’s wary of joining the rebellion, especially since that means teaming up with Jag. Jag is egotistical, charismatic, and dangerous–everything Zenn’s not. Vi can’t quite trust Jag and can’t quite resist him, but she also can’t give up on Zenn.

This is a game of control or be controlled. And Vi has no choice but to play.

Thoughts: Freighting and thrilling, Elana weaves a story of mind control, betrayal, and impossible decisions. Possession was definitely quite scary in its own way. The world of the story is divided into so many towns of people who believe certain things, but they all connect one way… there are people among them who can control you by their minds or voices. The “good” citizens don’t even know they are being controlled and I think that’s what made me look at this book and go ‘could you imagine living in a world like that’? I know I wouldn’t want to. I wouldn’t want to live in a world where I could never decipher if my thoughts were my own or not.
Our characters are all so very complex. There’s so many secrets each of them hides and so many twists and betrayals you may not see coming. Personally for myself, there were a lot of times where I could guess what was coming though or times where I wanted to yell at certain characters and tell them to just choose one thing and stick with it. Our protagonist Violet is so innocent to start, so unaware of the world around her and I loved watching her discover just how powerful she actually is and that she has always acted out for a reason. Along with her are two sexy fellas… Zenn and Jag. Firstly, I love both of their names! Also, I really loved and wanted kick both of them for different reasons. Zenn was one of the roller coaster boys for me. I didn’t like him at first… then I grew to love him and feel sorry for him and then towards the end it went to back to not sure if I loved or hated him. On the other side is Jag. If I had to pick a team, it would be Team Jag but despite his adorableness and hero traits there were so many times I wanted to kick him in the shins. Ultimately though, I love his and Vi’s relationship.
Overall, I thought Possession was quite unique and I was surprised at how many twists Elana actually threw into the story. That being said, there were a lot of times where I felt the scenes were rushed or I wasn’t quite understanding how one moment one thing was happening and the next it was something else. These were minor things for me though did not stop my love for the story. I honestly did love it and the unique concept of its mind control. This story had me turning the pages so quickly because I needed to know what happened next. Elana definitely has a way to make your emotions go all over the place through her characters and I commend her for it. Definitely cannot wait to read the next one!

One thought on “Possession by: Elana Johnson”