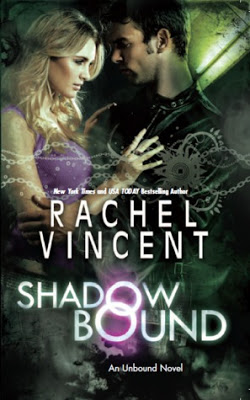 Synopsis: If you live in the dark long enough, you begin to forget the light…

KORI DANIELS is a shadow-walker, able to travel instantly from one shadow to another. After weeks of confinement for betraying her boss, she’s ready to break free of the Tower syndicate for good. But Jake Tower has one final job for Kori, one chance to secure freedom for herself and her sister, Kenley, even if that means taking it from someone else…

Ian’s ability to manipulate the dark has drawn interest from every syndicate in the world, most notably an invitation from Jake Tower. Though he has no interest in organized crime, Ian accepts the invite, because he’s on a mission of his own. Ian has come to kill Tower’s top Binder: Kori’s little sister.

Amid the tangle of lies, an unexpected thread of truth connecting Ian and Kori comes to light. But with opposing goals, they’ll have to choose between love and liberty….

Thoughts: Bad ass and rebellious, but still in same dark world we know and love. When I read Blood Bound, it had instantly become one of my top three favorite books. Everything about this series is sinister, binding, violent, and yet thrilling and enticing as hell. And, Shadow Bound in no way let me down.

We start off where Blood Bound essentially left off, except now we’re in Kori’s brain. She disobeyed her boss and for that she was punished and tortured. But, lucky for her, she’s given a chance to redeem herself with a new job. And redeeming herself and protecting her sister is all the matters to her. Jake tells her she must do whatever it takes, and I mean whatever, to recruit Ian Holt. Otherwise she and Ian will be killed… leaving her sister alone. Ian has the ability to manipulate the dark which is extremely rare. But, Ian has a job of his own and that’s to kill Kori’s sister Kenley. As the two grow close, they’ll have to determine what’s more important each other, the syndicate, or their families.

The concepts of this world never cease to blow me away. Despite how menacing the Unbound world is, I constantly find myself falling in love with it and its characters. Through every bloody turn and every uneasy encounter, I always find myself needing to know what happens next.  Rachel also has such a way of intertwining her words into perfect sentences. I felt like every other page there was a line or paragraph I was quoting. Lines that hit me so deep. It’s just yet another thing that makes me love every part of Shadow Bound.

With Blood Bound, I fell in love with Liv and especially Cam. Cameron Cabellero has a special spot in my heart, no doubt! And I was extremely happy to see them again and their roles in Shadow Bound. Although, I found myself loving our new narrators: Kori and Ian as well.

Kori is one of the strongest female roles you will ever read about. And I don’t just mean in the I can kick-ass, wield weapons, and castrate you way… which she can. Kori is also emotionally strong. Her family is what matters most to her, and no matter how tortured she’s been she still always has that goal in mind. If I was in Kori’s position, I’m not sure I would come out on top and she certainly shows the strength to do it. On the other side is Ian. Ian is also a bad-ass hottie but, he’s not the snarky bad boy role… he’s quite the opposite. He’s kept himself low on the radar, he cares completely about those he loves, he’s extremely protective, and most importantly he’s an extremely good guy. I found myself loving both of their stories and watching them collide together.

Overall, I intensely adore this series. With it being adult it gives me everything I could ask for. Bad-assery, Romance, Cursing, Drinking, Family, Sex, Fighting. And I love every single moment of this dark world. If you haven’t read this series… well start! If you’ve read Blood Bound, well I’m sure you’ll love Shadow Bound as well!