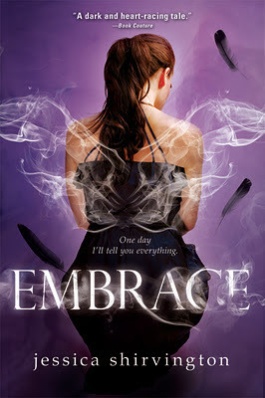 Synopsis: It starts with a whisper: “It’s time for you to know who you are…”

Violet Eden dreads her seventeenth birthday. After all, it’s hard to get too excited about the day that marks the anniversary of your mother’s death. As if that wasn’t enough, disturbing dreams haunt her sleep and leave her with very real injuries. There’s a dark tattoo weaving its way up her arms that wasn’t there before.

Violet is determined to get some answers, but nothing could have prepared her for the truth. The guy she thought she could fall in love with has been keeping his identity a secret: he’s only half-human—oh, and same goes for her.

A centuries-old battle between fallen angels and the protectors of humanity has chosen its new warrior. It’s a fight Violet doesn’t want, but she lives her life by two rules: don’t run and don’t quit. When angels seek vengeance and humans are the warriors, you could do a lot worse than betting on Violet Eden…

Thoughts: Embrace is a completely unique angel story. And, I’m sure you haven’t read anything like it. When I got Embrace my first thoughts were “Ohh, heavenly!” but honestly Embrace is the completely opposite. It’s thrilling and emotional in almost a dark way and I adored it.

Losing your mother the day you’re born isn’t easy to cope with. Finding out you’re half angel and half human, well lets just say Violet is constantly getting curve balls thrown at her. She thought her life with her father, her best friend, and Linc was going as well as it could be. But now the secrets are out. Violet has been lied to, getting a strange tattoo on her wrist, meeting a mysterious stranger who seems to know her and well, she may have no choice to where her destiny lies.

I absolutely adored how each character is presented in Embrace. Violet is the protagonist who definitely doesn’t have it easy, especially after discovering the truth about herself. And even though she sometimes is misguided, she’s strong. She’s completely loyal to those she loves. She fights for what she believes in and I honestly cannot wait to see her kick some butt in the future. With Violet, I also loved her relationship with her father and her best friend, Steph as well. Everyone needs a best friend like Steph!

Then there’s the boys that we all love. Let me start off with saying that I am Team Linc, but he’s not the only boy in the picture. Phoenix plays a vital role in Embrace. Is Phoenix sexy… heck yes he is! Did I completely understand where he was coming from… of course I did. You can tell that underneath his confidence he has his own demons, but that still didn’t make me Team Phoenix. So…. Linc. I think I fell in love with Linc the moment he was introduced. I love his age, his name, his green eyes, his protectiveness of Violet, the way his eyes pierce hers. Even though there’s some hurting going on, Linc always has Violet’s best interest at heart and you cannot help but fall in love with him! I need me some more Linc!

Jessica takes her story and gives her angels a twist in the dark and powerful direction. Don’t get me wrong, there’s still light and dark but, there seems to be so much anguish in this story. I honestly love reading books like this. There’s adventure, forbidden aspects, temptations, thrills, tons of emotion, more than just kissing (high five Jessica!), an amazing set of characters, and overall an enjoyable story. Cannot wait to read book two, Enticed, and see how Violet’s story continues.

One thought on “Embrace by: Jessica Shirvington”