Skip to content
Welcome to my stop on the Entangled Publishing TOUCH Blog Tour! 🙂 I’ve got an exciting interview with the characters and I may even be giving something away! You’ll have to read on to find out! 🙂
__________
– The Book – 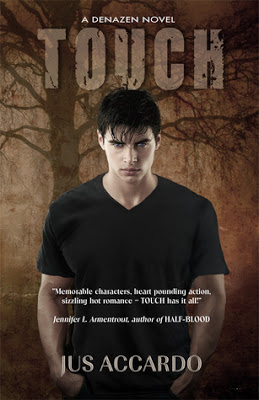 Synopsis: When a strange boy tumbles down a river embankment and lands at her feet, seventeen-year-old adrenaline junkie Deznee Cross snatches the opportunity to piss off her father by bringing the mysterious hottie with ice blue eyes home.
Except there’s something off with Kale. He wears her shoes in the shower, is overly fascinated with things like DVDs and vases, and acts like she’ll turn to dust if he touches her.

It’s not until Dez’s father shows up, wielding a gun and knowing more about Kale than he should, that Dez realizes there’s more to this boy, and her father’s “law firm,” than she realized. Kale has been a prisoner of Denazen Corporation — an organization devoted to collecting “special” kids known as Sixes and using them as weapons — his entire life.

And, oh yeah, his touch? It kills.

The two team up with a group of rogue Sixes hellbent on taking down Denazen before they’re caught and her father discovers the biggest secret of all. A secret Dez has spent her life keeping safe.
A secret Kale will kill to protect.

Jus Accardo is the author of YA paranormal romance and urban fantasy fiction. A native New Yorker, she lives in the middle of nowhere with her husband, three dogs, and sometimes guard bear, Oswald. Her first book, Touch, is due out in November 2011 from Entangled Publishing. She is represented by Kevan Lyon of Marsal Lyon Literary Agency.
Stalk Her! 🙂
Website || Twitter || Goodreads
Facebook || Blog
__________
– Interview with Dez, Kale, and Alex! –
*Q: Dez: You seem to like the party scene, and well making your father angry with your choices. What’s so good about it all, does it really help you?

Well, I mean who doesn’t love a good rave? As for doing it to make Dad angry–not sure I’d say it helps anything… I mean, yeah. I love pissing him off. There’s this vein in his neck that kinda throbs when he’s angry. It’s major funny. But it’s more than that. I do it to get a reaction–any reaction. At least if he’s reacting, I know there’s a human being inside there, ya know?
*Q: Dez: Can you really skateboard?! Or was that just a neat stunt at the party?

Nah, that was total skill. I could teach you if you wanted? It’s a hell of a rush! And guys on with it.
*Q: Dez: You meet this strange, sexy boy who was being chased after and you figured hey, why don’t I take him back to my house! What was going through your mind? I mean… he stole your shoes!

Yeah… They were my favorite, too! But I was pissed at my dad–which was nothing unusual. I knew he’d have a coronary if he came home to find some guy in the house. Plus, have you seen Kale? Wouldn’t you have taken him home?

*Q: Kale: What was your first impression of Dez? Why did you decide to trust her?

She was… I don’t know. It happened fast. And she helped me. No one had ever helped me before. Except Sue. She reminded me a little of Sue.

*Q: Kale: Is there anything you can tell us about Denazen that we don’t know? Do you have a favorite part of being a Six?

At Denazen, you don’t ask questions. I’m sure there’s a great deal we don’t know about them. Unlike other Sixes, there’s nothing redeeming about my ability. The only good that has ever come of it, is it brought me to Dez.
*Q: Kale: Being finally able to experience the world outside of Denazen, what’s your favorite part?

*Q: Alex: Were you surprised to see Dez? Did you think you’d ever see her again?

We see each other once in awhile–same scene, you know? We don’t talk though, so when she came to the pool hall with that little freak in tow? Yeah, I was a little surprised.

*Q: Alex: But uh, on a side note… you know, I personally think you’re pretty sexy, if you’re free, I’d love to attend a party with you ;).

*Q: Dez, Kale, and Alex: Anything you’d like to tell us that you haven’t got a chance to yet? We’re all ears… give us the dirty details ;).

*Dez points at you, then hitches a thumb back at Alex* I do. Do not go to a party with him. Let’s forget for a sec that on a good day he smells like a chimney, but he’s a dog. He’ll be humping poodles as soon as your back is turned.

*Alex folds his arms and shrugs* A dog? Really, Dez? That’s the best you’ve got? At least you can take me somewhere without offing the entire room. Can’t say that about Rain Man over there.
*Kale narrows his eyes as his fingers twitch* I don’t like you–and neither does she. I wonder if she’d try to stop me from touching you.

__________
– My Review –
Kick-ass, thrilling, fun, and seductive, Jus Accardo created a FANTASTIC story that has everything you could ask for.

Jus Accardo created such a brilliant story with Touch. The story line, the characters, the sexiness, the laughs, the thrills… it’s all so brilliantly done. I love the world of “sixes”. Honestly, I wish I was one! I don’t know what I’d want my power to be. I mean, changing dreams, touch, shape-shifter, reading thoughts, being able to move things, being a healer… there are endless possibilities. The whole story is one thrill after another and the world is modern yet so creative and I loved every single bit of it.

Read My Complete Review Here!
__________
– The Giveaway -﻿
Because I love this book to pieces… I’m giving away one copy to one lucky winner! 🙂
– There will be one winner.
– The giveaway will last for one week and will end November 26th @ 11:59pm EST.
– International.
– Winners will be chosen randomly.
– If you have any other questions please see my Giveaway Policy.
This Giveaway IS CLOSED.
Thanks for stopping by! And good luck! 🙂